Brianna – blazing a trail for youth at Canberra 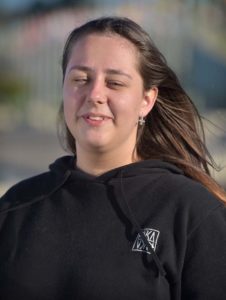 It wouldn’t have escaped your attention, but politicians are out on the campaign trail.

Brianna Merema from Broome knows more about Parliament House than most 17-year-olds. She recently won a national writing competition and was invited to Canberra and met leading politicians.

Brianna has Glaucoma and is blind, and has had 20 eye operations since birth. VisAbility has been supporting Brianna by providing Orientation and Mobility training in her home town.

“My school told me about the national Heywire Competition. I enjoy writing and I wanted to share my life with others. It’s a storytelling competition open to young people who live in rural or regional areas,” she explains.

“I wrote from the heart, about my life as a blind person. I know now that anything is possible. As I have got older I have become more independent.”

“We’re encouraging youngsters to share their stories. We want them to shape conversations at the centre of their local communities,” outlines Judith.

“The winners of the short-story competition were invited to the Australia Heywire Youth Summit in Canberra.”

Brianna was one of 52 youngsters to attend the week-long trip to Canberra which took place in February.

“I was able to share ideas with other like-minded youngsters. We spoke about life in rural Australia and the challenges and issues affecting young people.”

“It was great to brainstorm and be among like-minded youngsters. We took part in skills-building workshops and developed an amazing bond between us,” adds Brianna.

“One of the subjects we spoke about was discrimination – among those with disabilities and who are lesbian and gay. There was a real energy about the week. I came away with such good, positive memories”

In Parliament, youngsters spoke to politicians about their ideas.

Now she’s back, what’s next for Brianna?

“I’m in year 12 now and I share my experiences of living with a disability at my school – Broome Senior High. I speak in front of groups and assemblies and this has improved my confidence.”

“I’d like to travel more definitely. Long term I’d like to work with young people. Youth work appeals to me as it would be very rewarding.”