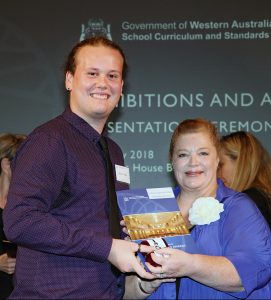 Late last year we shared the news that one of our 2017 graduates, Seb Liddle, had been nominated for a State VET Award of Excellence for his work in the field of Creative Industries, specifically Music.

We are extremely pleased to announce that Seb was named the overall winner for his category which incorporates Art, Drama, Dance & Music. This means Seb came out on top over students from across the State in all of these categories, including nominees from prestigious specialist music schools, to be awarded the State VET Exhibition Award for Creative Industries in 2017 at a formal awards night, held at Government House in Perth, where he was awarded his medal by the Minister for Education, Hon Sue Ellery BA MLC.

Seb began volunteering his spare time to work as a ‘roadie’ for Goolarri Media whilst still in year 11 then, due to his drive, passion and determination to succeed, was offered a part time paid position as an AV tech with the Shire of Broome’s Civic Centre as well as providing tutoring to Year 8 Music students throughout last year. Next on the agenda for Seb is to further his education in the Performing Arts and Audio Engineering with a plan to attend either the Australian Institute of Music (AIM) or the International School of Audio Engineering (SAE). In the meantime he is continuing to tutor aspiring young musicians here in Broome as a Bass teacher with Molyduka Music and continues to gain invaluable hands on experience as an Audio Visual Technician. With his skills in demand across the region he is inundated with work for The Shire at the Civic Centre as well as local companies Unbound Sound & Troppo who both provide AV support to global acts performing across the Kimberley. He remains firmly part of the community however volunteering his time and AV skills to productions by not for profit organisations such as Theatre Kimberley and more recently as a radio announcer for Goolarri Radio. Amongst all of this he also still finds time to rehearse with his band The Pot Shots, who performed recently at The Saltwater Music Festival.

The future holds big things for Seb Liddle, a true example that at Broome Senior High School you can become the best that you can be through hard work, perseverance and the support of world class teaching.